Read this FAQ to learn about your AppSumo team, billing, discounts, promotions and other related issues in Paldesk.

Download the Paldesk desktop app for Windows, Mac or Unix to manage your account and reply to messages directly from your desktop!

Install the Paldesk agent mobile app for iOS and reply to your customers and visitors on the go!

Install the Paldesk Agent mobile app for Android and reply to your visitors and customers on the go!

Read about common problems with mobile notifications on android devices.

This article will address some of the most frequently asked questions about billing and subscriptions.  Take a look at the full list below and let us know if there is anything else we should mention!

If you enter your payment information immediately upon creating your account, you will automatically be charged and upgraded once your 7-day trial expires.

When you create a new account on one of our plans, you will start a 7-day free trial. During your trial, you will not have to enter your credit card information. Unless you upgrade, your account will be deactivated once your free trial expires. All your data and configuration will be lost. Make sure to enter your payment information before your trial expires, to avoid losing your account.

2. How do I select my default price plan?

There are two ways you can select your default Paldesk price plan.

The first option is to go to our pricing page and register on the price plan of your choice. This will automatically start your free trial on that particular plan.

Alternatively, you can sign up on our home page which will create your account on the Rookie plan. From there you can go to Quick Setup – Billing – Subscription Plans and select a price plan.

Learn more in this support article.

3. What is a billing cycle?

A billing cycle, or billing period, is the length of time between the last statement closing date and the next.

Paldesk offers monthly or annual billing – the monthly cycle is one month (i.e. January 1st – February 1st) while the annual cycle is one year. Your billing period starts with your first charge, and does not include your 7-day free trial.

4. What happens when my free trial expires?

If you entered your payment information you will be automatically charged and upgraded once your free trial expires. We offer a 7-day trial, so you will be charged after 7 days.

If you didn’t enter your payment information, your account will be deactivated once your free trial expires.

5. What’s the price per agent?

Our price plans are as follows (per agent and per month):

That said, Stripe will automatically charge you per agent and per day the app was used. For instance, if you invite an agent on the Early Stage monthly plan and deactivate them on the same day, you will be charged for the one day they were an active part of the team. The fixed price per agent on the Early Stage plan is $19 per month (monthly), and the price per day is $19 / number of days in the month, for example, $0.63.

The daily price X active days = what you will be charged for the time your agent was active in your team.

6. Can I invite new agents in the middle of the billing cycle?

Sure, you can invite new agents anytime you like. Each time you add a new agent, the app will notify you that you will be charged as soon as your agent joins your team and verifies their account.

Since you are charged in advance for annual and monthly billing, if you invite a new agent in the middle of your current billing cycle, you will be charged for the time they used the app at the beginning of the new cycle. 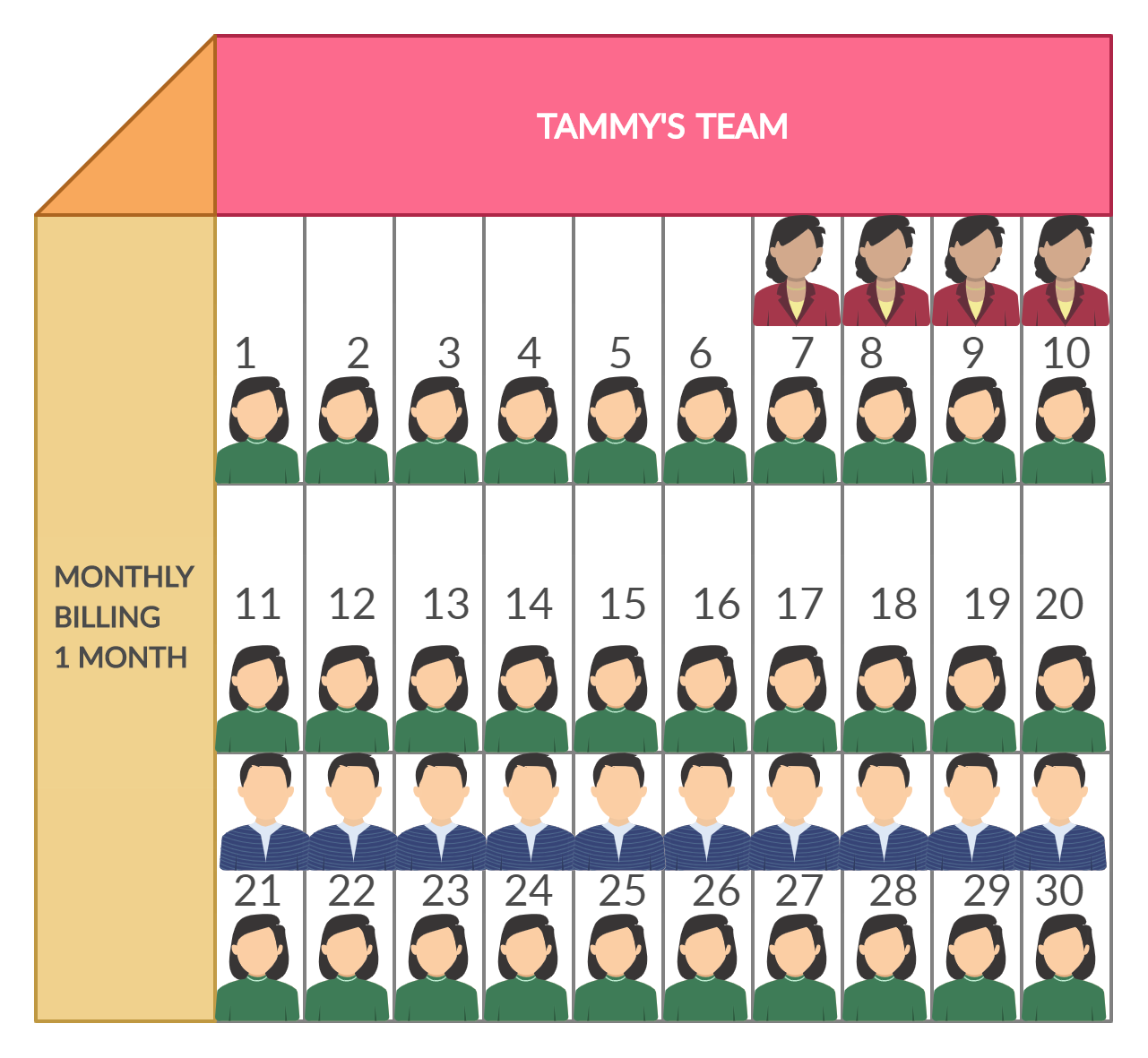 Image 1. Tammy invited 2 agents to her team during the month. Her charge for the next monthly billing cycle will include 10 extra days for one agent and 4 extra days for the other.

7. Why can’t I invite an agent on the Rookie plan?

The Rookie plan does not include agents, since it is meant mostly for freelancers who personally reply to all their messages. If you would like to invite agents to your team, you can always upgrade to Early Stage and unlock additional features.

8. Can I get a refund if I haven’t been actively using the app?

Your subscription charges are not related to your activity in the app. The lack of usage is not grounds for a refund. If you would like to stop using the app, you can simply remove your payment details or deactivate your account. Disabling your account will prevent any unwanted charges.

Read more about it in our Terms of Service, Article 9.

9. Will I be charged if I deactivate an agent before the end of the billing period?

In short – yes, you will be charged for the time your agents used the app.

Our payments are handled through Stripe,  and calculated automatically. Although our prices are per agent / per month (monthly or annual billing), you will be charged for the time your agents spent using the app. Stripe will automatically charge you per agent and per day the app was used.

So, if you invite three agents into your team and deactivate all three before the end of the billing period, you will still have to cover the expenses of the time they used the app. That said, you will not be charged for those three agents in the next billing cycle, or ever again unless you reactivate them.

10. Will I be charged if an agent has not verified their Paldesk account?

If an agent joins your team but does not verify their account, they will not be able to respond to messages. Additionally, you will not be charged for this agent.

11. What’s the maximum number of agents I can invite to my team?

There is no cap on the maximum number of agents you can invite to your team. However, please bear in mind you will be charged per agent, depending on the time they were active (and verified)  in your team.

12. If I invite an agent to more than one team, will I be charged multiple times?

Every team you create is viewed as a new account, so you will be charged even if your agent is in multiple teams. Read more about the difference between teams and groups here.

Image 2. Tammy created a new team on the Rookie monthly plan. She invited Maria as an agent in her second team, as well as her first team. Since Paldesk teams are almost the same as new accounts, Tammy will be charged for Maria’s seat in both teams, based on her active time.

13. Are my teams automatically on the same price plan?

Your new team will not be on the same subscription plan as your original team. The default plan for your new team will be Rookie, but you can always upgrade to a higher plan to unlock more features.

14. Does my new team also come with a free trial or am I charged instantly?

Your new team also comes with a free 7-day trial, you will not be charged right away.

15. What if I switch plans in the middle of the current billing period? 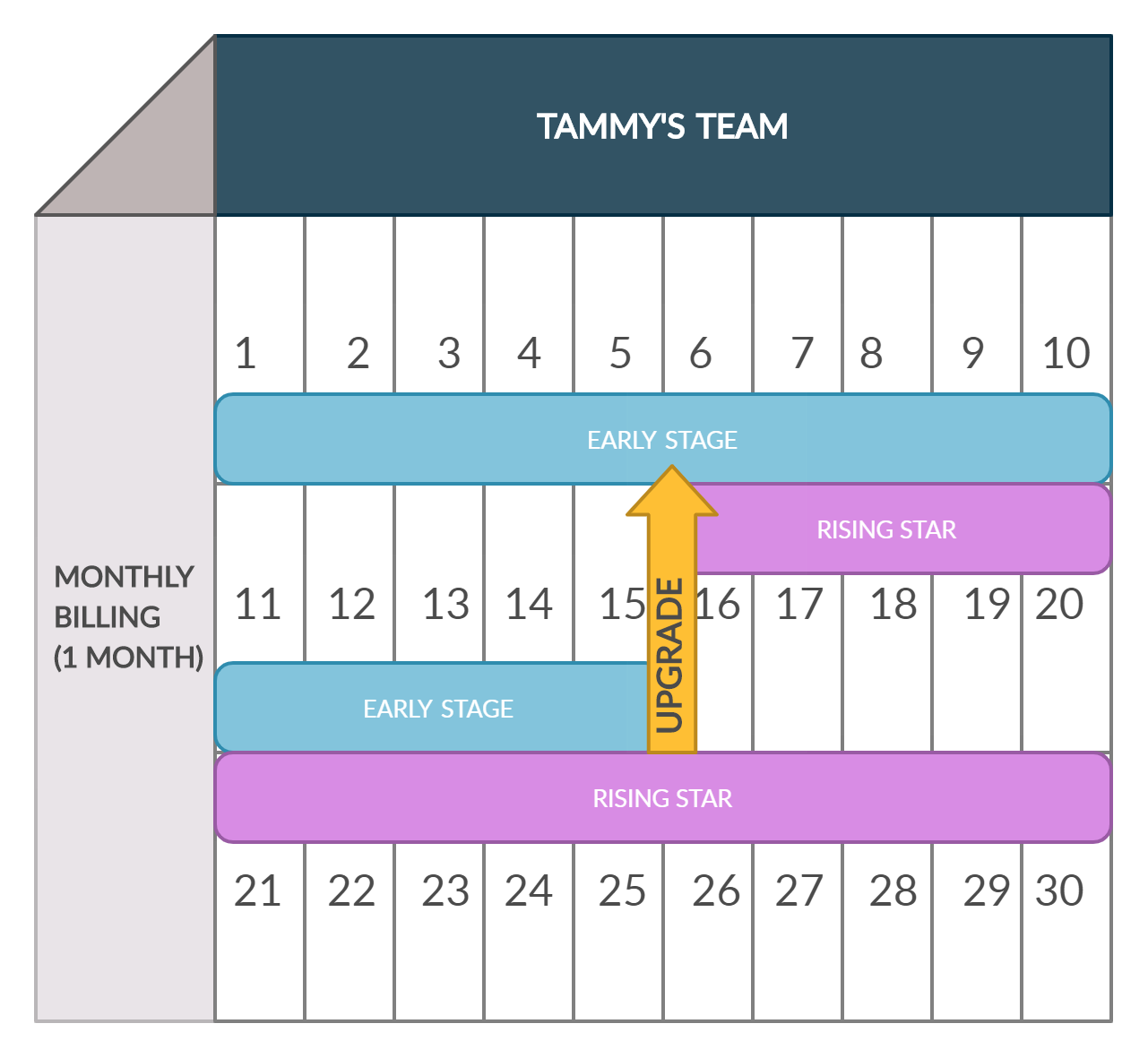 16. How can I cancel my subscription?

You can find a step-by-step guide in this support article.

17. If I cancel my subscription (deactivate my account) before the end of my billing cycle, will I still be charged? Can I get a refund for the time I haven’t been using the app?

Yes, you are charged in advance for the entire billing cycle, so it doesn’t matter if you deactivate your account 2 days or 2 weeks in. You will not receive a refund for the current cycle if you cancel your subscription, you simply will not be charged again in the next one.

Example 1. You have a team on the Early Stage monthly plan, and you cancel your subscription in the middle of the month. You will be billed in advance for the entire month and you won’t be refunded for the 2 weeks you have been inactive. However, you will not be charged for the next month, as your account has been deactivated.

Example 2. Your team is on the Rising Star annual plan, and you decide to cancel 6 months in. You won’t be refunded for the 6 inactive months, but your annual subscription will not be renewed either.

This concludes our billing FAQ, we hope you have found the answer to your question! If not, chat with our support team or send us an email to support@paldesk.com we will be more than happy to address any questions, comments, or suggestions you may have!